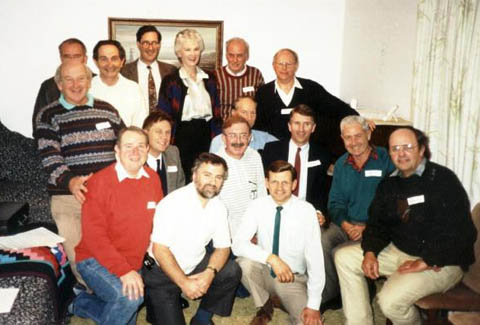 The Inaugural Meeting of The Melbournaires May 9, 1991
The Melbournaires resulted from the meeting of two minds. Hilton Amos had been bitten by the ‘barbershop bug’ when he lived in New Zealand and sang with the City of Sails Chorus in Auckland. Hilton’s employment brought him to Melbourne and he began to suffer barbershop ‘withdrawal symptoms.’ At the same time, but independent of Hilton, Graham Murphy acquired a tape of 1976 BABS Convention held at Leicester UK. And, like Hilton, Graham was also bitten by the ‘barbershop bug.’

Both Graham and Hilton separately located the Melbourne Chorus of Sweet Adelines International to determine if there was a male barbershop chorus in the city. It was then that the paths of Graham and Hilton crossed and they were put in touch with each other. Following several phone calls, a meeting was arranged at Hilton’s home and almost everyone present on that evening, May 9, 1991, was either the husband or friend of a member of the Melbourne Chorus.

Apart from a quartet of guys from Gisborne called ‘Close Shave’, Hilton Amos and Will Hart were the only ones who had actually sung with a barbershop chorus – Hilton with the City of Sails Chorus in Auckland, NZ and Will with the ‘Harmony Drifters’ chorus from his home town of Hartlepool, UK. Several Sweet Adeline members also attended this first meeting, one of whom was Mandy Johnson. Mandy offered to be our director until, as she put it, ‘You find someone to take over as director.’

Mandy was the best thing that could have happened to the fledgling chorus. Her personality, skills and the fact she had been coached by leading barbershop educators was exactly what the ‘chorus’ needed. During the next few months of 1991, Mandy took to the chorus with a will. She taught notes for all parts with the aid of a piano, coached in the art of breath control and vocal production and even introduced the chorus to the noble art of choreography. The chorus owes a great debt to Mandy Johnson – everything taught by Mandy has been reinforced by every subsequent visiting director and educator.

With Mandy in charge, the chorus grew in number, improved their sound, and began singing to the public.

One night a slightly built guy walked through the door. He had an American accent and we soon discovered that he knew a lot about barbershop. In fact he had given up a position as Musical Director of the Hall Of Fame Chorus in Ohio to come and work in Australia. Mandy happily passed the position of MD to our new-found American friend, Bill Albrecht.

Bill immediately instituted craft sessions in every rehearsal that were designed to improve our knowledge of harmony and the quality of our voices. He also introduced comedy songs to spice up our shows. Bill's wife Kathleen joined him in Australia and she was also an experienced barbershopper and soon became MD of the Melbourne Chorus.

By the time Bill had to return to the States the chorus had expanded to 36 members and was a much improved unit. In 1995, we managed to win the bronze medal at the AAMBS convention in Canberra.

When Bill left, Len Nayler stepped into the breach and took over as MD. Len was one of the original Melbournaires having joined the group at its second meeting. Len's strength was in the visual presentation and interpretation area and his wife Robyn who was a co-director of the Melbourne Chorus added her expertise in the areas of music and singing. At the Sydney Convention in 1997 the chorus received the same score as it did in Canberra but slightly higher in presention and lower in singing than before.

The chorus advertised widely for an experienced MD and received an application from Bernie Cureton who was MD of the Great Western Chorus in Bristol, England. Bernie came to Melbourne for a short visit and an interview and we decided to ask the Immigration Department to allow Bernie to migrate to Australia as a person with "special talent." Bernie's strength was in vocal production and interpretation. The sound of the chorus improved under his direction. For a short time Bernie was MD of the Melbourne Chorus as well. Quartet coaching sessions were instituted during his time.

Bernie was finding it difficult to make a living from music in Melbourne and so he applied for and gained the position of MD with the large Banana Blenders Chorus (now simply "The Blenders") on the Gold Coast. Len stepped into the breach once more while the chorus advertised for another MD.

This time the chorus looked to its own ranks for its MD. The musically very talented James Wettenhall became MD with Ian Lushey as his assistant. Ken Green instigated a "youth program" to encourage harmony singing in schools during this time. Several schools formed their own quartets and Ken managed to have barbershop harmony included as an option in VCE Music Practical.

In 2001 The Melbournaires hosted the third Pan-Pacific Barbershop Convention which attracted choruses from New Zealand and Hawaii as well as Australia. The Melbourne Concert Hall (now "Hamer Hall") was hired for the occasion and the convention dinners were held at the Exhibition Building. Over 1100 guests registered for the convention which was to commence on September 14. However, on September 9 the terrorist attack on the twin towers in New York prompted the grounding of all aircraft in the USA and American guests who had not left for Australia were obliged to stay home. The Kiwis ran into trouble with their transport as well when Ansett Airlines folded during the convention.

Determined to do well at our own convention, the chorus imported an experienced barbershop coach from Canada to work with us in the six weeks prior to the convention. Wally Coe worked us hard and possibly worked MD James even harder. Many members devoted themselves almost full-time to the task of organising the convention but despite this distraction we worked at our songs with extra rehearsals to generate a good score on the stage (but not quite good enough to get us a medal).

In 2002 James decided  to do other things in music and Ian Lushey took over as MD. Ian has built his expertise by attending workshops for chorus directors in other states and in New Zealand as well as by regular attendance at Harmony College. In 2005, the chorus decided that Ian should attend the Director's stream at the Harmony College that followed the 2005 Salt Lake City International Convention. AAMBS helped with Harmony College costs and the chorus provided the transport costs. Ian made the most of the opportunity and attended the international convention as well.

Ian ensures that our rehearsals are not only opportunities for the chorus to practise its repertoire and improve its performance but also opportunities for fun and good fellowship between members. Quartet singing has been encouraged.

At the 2005 AAMBS Convention at Broadbeach on the Gold Coast the chorus won the Best Medium-size Chorus award.

The chorus has a Support Group comprised of the partners of many of the members. The Support Group runs fund-raising activities and assists in the operation of the chorus.